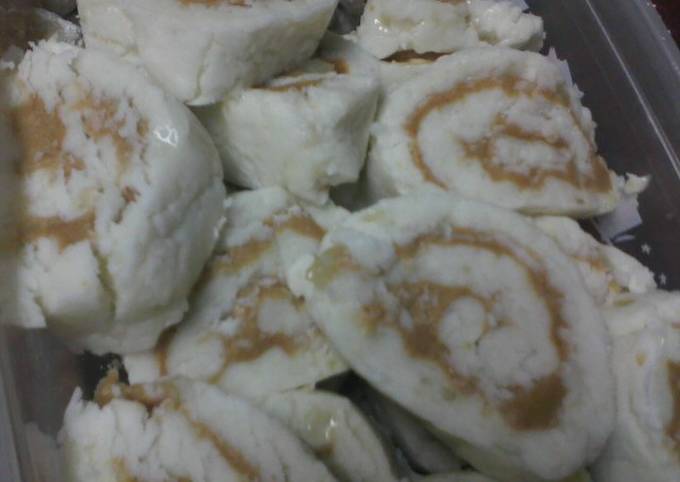 This no-bake potato candy with a wonderful salty-sweet combination is an old fashioned recipe that's been passed down for generations. It combines only three ingredients: one mashed potato, powdered sugar, and a layer of peanut butter. The dough is then rolled into a log and cut like pinwheels. You can cook Tater candy (aka Irish potato candy or peanut butter pinwheels) using 4 ingredients and 6 steps. Here is how you achieve that.

This old-school candy reminds us of divinity and other traditional homemade Southern sweets, but gets a little more creative. Complete with creamy peanut butter, powdered sugar, and vanilla extract, Potato Candy is the unique Southern sweet that's sure to turn heads at your next family reunion, holiday festivity, or birthday celebration. Some of my favorite ways to mix it up include cookie butter, almond (or another nut) butter, Nutella, crunchy peanut butter, chocolate chips, sprinkles — go crazy! The simplest version of this candy is made by combining mashed potato with powdered sugar, then rolling the "dough" out, spreading peanut butter on top, then rolling the whole thing up, jelly roll-style.

After it's rolled, it's refrigerated for several hours, then cut into slices. Old Fashioned Potato Candy is made up of powdered sugar, mashed potatoes, and nut butter. Irish potato candy is a traditional sugary confection that (despite its name), is not from Ireland, and does not usually contain any potato. The candies have a coconut cream center and a cinnamon exterior, which makes them resemble small potatoes. Summary: An old-fashioned candy with a surprising ingredient, these Potato Peanut Butter Pinwheels are a charming dessert.